Skip to content
Home » Blog » If cupping is good enough for Samuel L Jackson what is stopping you? 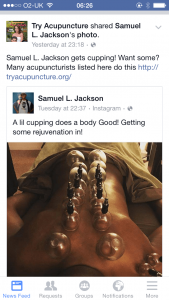 Cupping is described as;

…in Chinese medicine a therapy in which heated glass cups are applied to the skin along the meridians of the body, creating suction and believed to stimulate the flow of energy.

The process is quite simple and if you’ve never had it the entire session is very relaxing. Warm heated cups are placed along the meridians of the body, typically along the back.

The cup creates a vacuum which causes the skin to rise and redden and for the blood vessels to expand. The cup is generally left in place for five to ten minutes to get the full effect.

It should be noted however that cupping many be used as part of a therapy programme for lots of conditions.

So what are you waiting for? If you fancy trying cupping and seeing what it can do for you and your circulation then why not call the team at Acupuncture That Works today and book in a session. Call us now on 0800 051 76 88.

You can find out more about which cookies we are using or switch them off in settings.

This website uses cookies so that we can provide you with the best user experience possible. Cookie information is stored in your browser and performs functions such as recognising you when you return to our website and helping our team to understand which sections of the website you find most interesting and useful.

Strictly Necessary Cookie should be enabled at all times so that we can save your preferences for cookie settings.

If you disable this cookie, we will not be able to save your preferences. This means that every time you visit this website you will need to enable or disable cookies again.